Motion in Maps, Maps in Motion 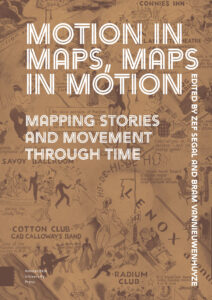 Mapping Stories and Movement through Time

Motion in Maps, Maps in Motion argues that the mapping of stories, movement, and change should not be understood as an innovation of contemporary cartography, but rather as an important aspect of human cartography with a longer history than might be assumed. The authors in this collection reflect upon the main characteristics and evolutions of story and motion mapping, from the figurative news and history maps that were mass-produced in early modern Europe, through the nineteenth-and twentieth-century flow maps that appeared in various atlases, up to the digital and interactive motion and personalized maps that are created today. Rather than presenting a clear and homogeneous history from the past up until the present, this book offers a toolbox for understanding and interpreting the complex interplays and links between narrative, motion, and maps.

Zef Segal is a lecturer in modern history at the Open University of Israel.
Bram Vannieuwenhuyze holds the Explokart chair of historical cartography at the University of Amsterdam.