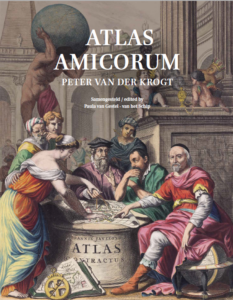 This Liber Amicorum was presented to Dr. Peter van der Krogt on 24 June 2022 on the occasion of his retirement as Jansonius curator of the collection of maps & atlases at Allard Pierson at the University of Amsterdam. A large number of colleagues from home and abroad have written a personal and/or scientific contribution, in which they express their appreciation for Peter, or reminisce or discuss a topic from the core area of Peter’s own research field: atlases and globes. In this way the rich, forty-year-long career of Peter is highlighted in various ways. This book also contains a biography and a complete list of publications of Peter.

About the Explokart Studies Buy the book

Compiled by René van der Krogt to the title page in the Theatrum Orbis Terrarum by Abraham Ortelius (Amsterdam UB-AP, OTM: OF 72-23).

The composition of this Liber Amicorum for Peter van der Krogt has been realised partly thanks to the participation of colleagues from different countries. The project started in the summer of 2020, when Peter casually announced that he would turn sixty-five on January 15, 2021. In the Netherlands this used to be the age at which people could retire. But this has been pushed back by a few months in the last decade and Peter already knew that his real retirement would start only in the summer of 2022. That got us, his direct colleagues, thinking. If we were to give potential Liber Amicorum authors enough time to write an article, action had to be taken immediately.

In the autumn of 2020, some fifty colleagues were approached, many of whom immediately responded positively. A provisional list of participants could be compiled in January 2021. The authors were requested to contribute in a language of their own choice.

The result shows a multitude of subjects. Some authors have written personal memories, others have chosen a topic within their field or dealt with a topic that simply intrigued them. But all have succeeded in writing something about Peter himself, or about one of the many historical-cartographic subjects that Peter himself has been involved in.

The wide variety of topics has led us to divide the book into a series of personal and of scientific or professional contributions. We have further ordered the latter group by subject, and then arranged it alphabetically. Little editing has been applied to the content of the articles. Editing has been carried out exclusively on the layout, the uniform presentation of the source and literature references and the quality of the illustrations. The editors have accepted the difference between “British English” and “American English”. The difference in spelling between the Dutch spelling of the word ‘cartografie’ and ‘kartografie’ has not been adjusted. This is the choice of the respective author and of the spellings in the original textual sources.

The result is now on the table. A substantial publication, which in all respects is a worthy addition to the Explokart Historical-Cartographic Studies, of which Peter has been one of the driving forces in recent years as project leader. This trajectory, codenamed LAPEK (Liber Amicorum Peter van der Krogt) was exciting and not always easy. We made up many excuses, held secret consultations and secret meetings, and had to be very careful with our words, because Peter was always around in the map room. We also regularly had to look for answers to questions that Peter himself could have answered immediately.

This publication has been produced with the cooperation of 39 authors and perfect – and above all pleasant – cooperation within the editorial team. We would like to sincerely thank all these participants for their efforts to make this book a success: compiling a Liber Amicorum without authors is, after all, impossible. In addition, a compliment is justified for the designer of this book, Annelies Mikmak, and for publisher Brill in Leiden, who immediately agreed to the publication without any hesitation. Peter’s brother René deserves a special mention. He has made a major contribution in the form of a lot of visual material and biographical data about the early years of Peter and his family. We are very much indebted to Francis Herbert, who has corrected the translations of our Dutch texts.

Dear Peter,
On behalf of all concerned, we would like to congratulate you on reaching your retirement age. It is our great pleasure to present this book to you as a lasting and well-deserved tribute.

With this Liber Amicorum you will receive the more well-deserved thanks and appreciation from friends and colleagues after an extremely active career in the practice of the history of cartography. I would also like to congratulate you on the occasion of reaching retirement age. Our shared passion resulted in a collaboration of almost three decades and without exaggerating, I stood at the cradle of your academic career. In the English version of your standard work Globi Neerlandici published in 1993, you wrote a dedication addressed to me: ‘for Günter Schilder who showed me the way to globes’. This remark is indeed based on the fact that in 1978 I was looking for a competent student who was able to make an inventory of globes up to 1850 preserved in Dutch collections. In this year, too, I became a board member of the Internationale Coronelli-Gesellschaft der Globusfreunde. It was a thorn in my side that many countries already had inventories of globes, but that the Netherlands, with its great cartographic tradition and as an important manufacturer of globes, did not have such an overview. I felt it my duty to provide such a list. You were in my college at the time, a young man with a beard, who made me look cheerful and intelligent, and who also had knowledge of the Latin language. The deal was made and, as a paper for ‘major secondary subject Historical Cartography’, you started to work on globe research. Your work ethic, bibliographical skills and organizational talent already manifested itself in this early work, which was eventually published in English by HES Publishers in 1984 under the title Old Globes in the Netherlands. This book was the prelude to a higher level, because you indicated that you wanted to start a PhD research on globes. An application submitted to NWO was granted and in the following four years you conducted worldwide research into Dutch globes. The research was divided into two subjects: an overview of the production of globes manufactured in the Netherlands, and a standardized cartobibliography of these globes. With the end product, the Globi Neerlandici, you have created a standard work that received universal appreciation worldwide and set the tone for other countries.

As a promoter I was very proud of you, because with this work you helped to put the name of the young discipline of historical cartography in Utrecht on the map. Sometimes I felt a little guilty for charging you with too much work. I look with admiration at one of the by-products of your PhD research: Advertenties voor kaarten, atlassen, globes e.d. in Amsterdamse kranten 1621-1811 (Advertisements for maps, atlases, globes, etc. in Amsterdam newspapers 1621-1811 (1985)). You wrote in a dedication addressed to me: ‘for Günter Schilder, who prompted me to this work’. It must be remembered that this labour was done before the computer age and you spent months in the warehouse of the Amsterdam City Archives, systematically ploughing through the newspapers with a typewriter for advertisements with cartographic content. This work continues to be an invaluable resource for many researchers.

After the promotion I couldn’t offer you a job at first and unfortunately had to let you go. You went to work at SDU in The Hague for a short time. But when a large-scale facsimile project about the famous seventeenth-century Dutch collector’s atlas by Laurens van der Hem was cancelled, I managed to convince the faculty management to hire you and let the catalogue part go ahead. This fifty-volume collector’s atlas in the Österreichische Nationalbibliothek in Vienna is a collection of maps, prints and drawings of countries and cities around the world and in its entirety is a unique Dutch cultural monument. With the delivery of an illustrated catalogue of the entire collection, a long-cherished wish came true for me too. For, already during my studies in Vienna, I had the privilege of studying this extraordinary cultural mirror of the most important Dutch era, which also formed my first contact with Dutch cartography and exerted such a great influence on me that the study of this field eventually became my career choice. Together with art historian Erlend de Groot, you worked on the six-volume catalogue with your typical persistence. We can be proud that, partly because of your contribution to making this collection accessible, the Atlas Blaeu-Van der Hem was placed on the United Nations list ‘The memory of the world’ in 2004.

In all that time you have made an essential contribution to the expert guidance of the working groups with qualified volunteers in the historical-cartographic research program Explokart. The deployment of these working groups enabled us to also investigate subjects in historical cartography that would otherwise remain unanswered due to lack of time on the part of the permanent staff. The results of this in a specially designed series of publications are well-founded reference works with map bibliographies. We can safely say that the massive efforts of these volunteers represented a unique phenomenon in historical-cartographic circles and earned them international recognition. We sometimes went through a difficult period, but my credo was always: publish! And this call was very successful: since 1996 we have always been rated ‘excellent’ by the international assessment committee. As a result of these assessments, the Utrecht University Board labeled our research program one of the four ‘research pearls’. Because of this we enjoyed a certain protection for a while. Your part in this process has been of great importance to this success.

In the meantime you had already started a new large multifaceted work, the reworking of Professor Koeman’s Atlantes Neerlandici. Although the original edition (1967-1971, and its Supplement 1985) was groundbreaking for its time, new discoveries and research made this pioneering work obsolete after thirty years. You have now taken on the immense task of compiling a completely new format for this atlas bibliography. This includes a re-inventory of surviving Dutch atlases in libraries worldwide, making optimal use of modern communication and data processing capabilities and a publisher who understands the usefulness of, and has confidence in, such a project. There is no doubt in my mind that you are the right person to complete this huge project.

Dear Peter, In the thirty years that we have worked together, I may not have expressed how much I appreciated your work all these years. Because my credo has always been that everyone should do their best to keep our vulnerable profession going. Each of us has completed this in our own way. Strangely enough, we never worked together on a larger project, but each followed his own research. But the result was that each of us had only one goal in mind, namely: to put our field on the map. And in difficult times I could always count on your commitment and support. I am still very grateful to you for this.

When you reach the end of your working life, a new phase officially begins for you. It is true that you are freed from certain obligations, but knowing you, many activities continue as usual. And that’s a good thing! Because what could be better than working on our fascinating subject of historical cartography? I wish you good health and above all a lot of fun.